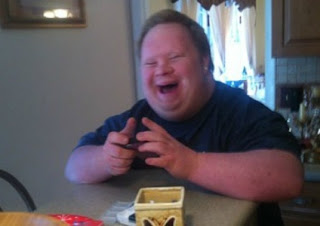 FREDERICK, MD — New details have emerged of the death of Ethan Saylor, a mentally handicapped man killed inside a movie theater in January while wearing police handcuffs. The official cause of death was asphyxiation, and an autopsy has revealed that the man suffered a peculiar injury — fractured throat cartilage — which one expert says could only have been caused by force of some kind. Force, which could have included a direct blow or manual strangulation.

Ethan loved the movie and clapped at its end. He wanted to see it again and refused to leave. Police were called. Ethan's caretaker explained that they lacked the money to purchase more tickets and asked police to please wait it out. Touching Ethan would make him "freak out."

“Next thing I know, there are I think three or four cops holding Ethan, trying to put him in handcuffs,” the aide told authorities, according to Sheriff’s Department documents. “I heard Ethan screaming, saying ‘ouch,’ ‘don’t touch me,’ ‘get off’ and crying. Next thing I hear is nothing.”

The police officers who killed him are still on the job.

Ethan Saylor, who police murdered over a movie ticket, Kelly Thomas, who police murdered for vagrancy, and Tim Sauders, who jailers murdered on a restraint table where he was abandoned for four days, were all Caucasians. They and other Caucasians were killed like black people with brain dysfunctions are, but their families' treatment after the murders significantly differs from the experience of some black survivors. The media reported the circumstances of these men's wrongful deaths, and accountability was demanded. Ethan's death is being examined by the U.S. Justice Department.

All the families were or will be awarded damages for the police murders. None of the families were censored, gangstalked, and financially persecuted for communicating about the deaths of their disabled relatives. No police went to the homes of Ethan, Kelly, and Tim and warned their families not to report crimes done to silence them. Survivors were not threatened by police with Tasering and arrests for complaining about the murders. Their homes were not burglarized to remove evidence related to the murders and denial of due process of law. None of these men's elderly relatives were sexually assaulted on their hospital beds as punishment for seeking justice in court. Nobody sprayed a chemtrail "x" over their rooftops. No one outlined their yards in paint and ordered helicopters to stand still over their rooftops for 30 minutes as harassment. They are not victimized by malicious prosecution. These families' phone calls and Internet usage are not blocked to prevent the world from knowing about their suppression - because they are Caucasians.

Caucasian families' cries for justice when police kill their disabled relatives are not ignored by every human and civil rights organization or suppressed by the media and law enforcement agencies, because the murders are not covered-up by the U.S. Justice Department. White survivors do not endure harsh tactics to elicit their silence. They are not faced with the possibility of having to take the murders and their own victimization before the United Nations as a last resort in the search for justice. All of these circumstances befell Larry Neal's family, because we are black.

Ethan Saylor, Kelly Thomas, and Tim Souders were Caucasians. They were murdered like Larry Neal was under the color of law. Larry was secretly arrested and held 18 days without his heart and psychiatric medications until he was murdered by that deprivation or by Taser or by restraint device or by brutality, but he was black. In America, that makes all the difference in how police murders are handled, even with blacks in positions of government responsibility. That is because most Negroes in decision making positions work for white supremacist globalists who consider it ridiculous to answer for any black person's wrongful death, particularly one who is mentally disabled. They have no respect whatsoever for anyone's humanity, but with blacks, they are not afraid to show it.

Families of mentally challenged people of every race and everyone who cares about their human rights must band together. Survivors of white police violence victims are treated better than survivors of black victims, but at the end of the day, they all have dead love ones. Families with members who suffer from schizophrenia, Downs syndrome, dementia, bipolar disorder, PTSD, Autism, and other brain issues must realize that whether black, white or other, their loved ones are at greater risk for incarceration, brutality, and police murder. None of our mentally challenged relatives and neighbors are safe as long as news about their deaths is stifled and police officers and jail guards are protected after wrongful deaths. It is time for everyone to unite and give Assistance to the Incarcerated Mentally Ill.

In the United States of America, a country that reportedly goes to war for the sake of "human rights," there is a blaring need to give at least DOG JUSTICE to the mentally ill. Read more in the seven(7) links below: 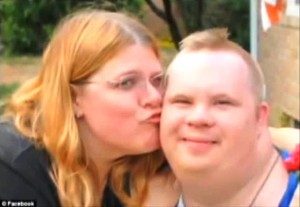 A farewell kiss for Ethan Saylor.

Dog Justice for the Mentally Ill
Posted by MaryLovesJustice Neal at 11:02 AM